Ibiza: Climate, Nature & Geological Aspects
What you need to know before choosing your garden plants

The Pitiusan islands: Ibiza and Formentera The Pitiusan archipelago (known as "Las Pitiusas") form part of the 4 main Balearic islands which also include Mallorca and Menorca and is located in the Mediterranean sea approximately 90 km east of the town of Valencia.

The Pitiuses consist of the islands of Ibiza and the smaller one of Formentera, covering together a total area of 623km². Ibiza (at 527km²) is bumpy with many rolling hills and plateaus and its highest point at 475 metres is mount Sa Talaia, near San José, in the municipality by the same name. This range is known as the Serra de Cala Molí.

The land is essentially based on the Jurassic and Cretaceous limestone and marl rocks of the Triassic. The rains have transformed these soils into rather heavy, clay soils, with little organic matter. The soil profile is often very thin except in the plains where topsoil can sometimes reach several metres. There are also some more sandy areas but overall the earth is red and has a tendency to "stick" when wet, which confirms presence of clay in quantity.

It is said that around 700 BC, the island was covered with forest of oaks that have disappeared due to logging for glass industry, ceramics, firewood and cooking. This systematic eradication profoundly affected the climate and soil quality to let appear a pine population, hence why the islands of Ibiza and Formentera are known as the Pitiuses Islands.

All this vegetation is particularly well-adapted and suited to the climate of the island, which is a mild Mediterranean climate, dry and very sunny. Water resources are random and the quality of the water extracted from aquifers is often brackish, depending on the area and depth of drilling. On the other hand, the exponential development of tourism requires drawing more and more water and we often come to a lack of readily available drinking water in Summer.

Evidence confirms the presence of a river in Santa Eulalia less than a century ago (hence the name "del rio"): 17km long from Monte Es Amunts to the city of Santa Eulalia, water was supplied to the villagers by a clever system of locks and watermills created by the Moors in the 10th century and fully functioning until the late 20th century.

These climatic and geological conditions are tough on the vegetation, despite the idyllic appearance of the island. Indeed the many factors that we have just briefly mentioned are, in some cases, limiting steady growth.

On the shores, one notices many indigenous plants completely transformed into "bonsai" by natural winds and extreme climate conditions of those particulars areas. Similarly, among introduced species, and there are many, one can notice certain difficulties for regular growth, climate and soil appear as the first limiting factors.

The winds that blow on the island generally come from the Sahara, particularly during the Summer months, are dry and rapidly change the relative air humidity. In addition to the current they bring, the sudden change of moisture has a drying effect on both soil and plants, and it is necessary to compensate for the water loss and avoid stress on plants. The cold winter winds have the same effect in addition to a decrease in the thermal sensation and sometimes, though rarely, bringing frost at night.

There is little that can be done to fight against the wind, if not in the design of cultures—we recommend selecting wind-resistant plants and their planting is important in order to reduce the effects of maximum winds.

Temperatures are relatively mild throughout the year but can reach threshholds that are sometimes too low for certain types of subtropical plants. In the summer, the heat can be so high that plants need well-planned irrigation systems water because rainfall can be virtually absent during a period of nearly six months. The result is that soils dry out and roots often suffer beyond repair.

We can overcome this drought using:

When one is lucky enough to have water in the subsoil, it is rarely very good quality, often very hard and loaded with salt brackish see. The effect on the physiology of plants is problematic because the calcium in solution and salts block foliar and root assimilation creating deficiencies, growth slowdowns and can lead to significant losses.

Solutions are varied and costs vary considerably depending on the choice:

Some plants do not “hold” because climatic factors are not favourable to their proper development. An example would be a palm tree that grows beautifully in the region of Málaga. On the island of Ibiza, this plant has been unable to acclimate to the local conditions. Other plants may be capricious, yet all they need is a specific location, good exposure and wind protection to grow rapidly and prosper.

At Elaia Ibiza, we are very familiar with the local climactic conditions and the plants that are best suited and adapted to the different microclimates of the island. We will happily advise you with your botanical choice. 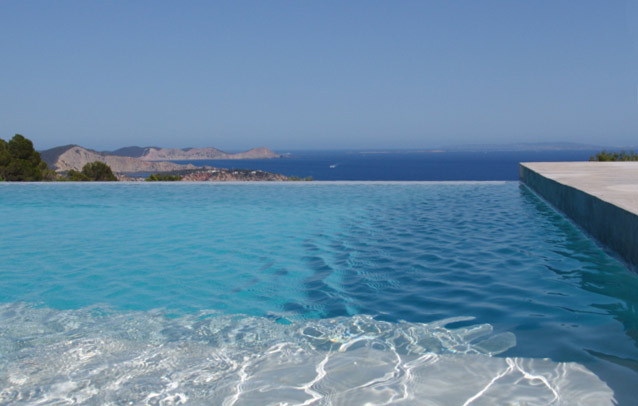